Serrano ham is Spain’s dry-cured meat with a dry texture and rich flavor emphasized by preservatives from the curing process.

If you’re looking for the answer to the question, keep on reading. This article will tell you everything you need to know about Serrano ham and why it would be wrong to call it nitrate-free.

Some cured hams can spend up to 30 days coated in salt, a natural source of nitrates.

For Serrano ham, this process lasts about 15 days. During this time, Serrano ham absorbs the nitrates from the salt.

Nitrates and nitrites are necessary cured meat additives. Sodium nitrite is added to meat products during the salting phase to prevent the growth of harmful bacteria and help the meat last longer.

Also, it ensures that cured meat is rich in flavor and gives it its signature pink hue.

Interestingly, we get less than 5% of our daily sodium nitrate intake from cured meats.

Instead, most of it comes from leafy vegetables like spinach and rocket, which naturally contain higher sodium nitrite levels.

However, the use of preservatives depends on the manufacturer. Some add sodium nitrate and potassium nitrate to stop the ham from spoiling and give it a more attractive pink coloring.

While recent research has linked nitrates in food to potentially cancer-inducing effects, whether they’re bad or good for us hinges on how and where the food is processed.

For example, frying or cooking meats like bacon and hot dogs at high temperatures turn nitrates into nitrosamines which are generally considered unhealthy.

Compared to products that require cooking over an open flame, fried and smoked meats, Serrano ham has a lower nitrosamines build-up.

Also, its nitrates levels are regulated by European authorities and add up to 150 ppm, the amount necessary to combat the spread of microbes.

Is Serrano Ham a Processed Meat?

Any meat that isn’t fresh is considered to be processed. Cured meats are typically treated with salt, sugar, and preservatives.

However, some manufacturers have started using celery salt, a natural nitrate source.

Due to this, some of these products are now marketed as uncured. However, celery salt serves the same purpose as sodium nitrite, extending the product’s shelf life.

To determine whether Serrano ham qualifies as processed meat, let’s look at how it’s produced.

The pork used to make Serrano ham can be taken from any Spanish pig, except for black Iberian pigs, exclusively used to produce Iberico ham.

The dry-curing process can last anywhere from six to 18 months.

First, the meat is wholly salted and left to rest for seven to 10 days.

Then it’s time to wash the ham and get rid of the salt.

Finally, the rinsed meat should spend one to two months in a 59-30° Fahrenheit drying room (it’s never stored at freezing temperatures).

The curing phase takes six to 12 months. During this time, the ham hangs from the ceiling to lose water and acquire rich flavors.

The curing can be extended to 18 months, depending on the climate and size of the meat cuts.

Since processed meat is any treated meat product, salted, cured, canned, or dried fall under this category.

As you can see, Serrano ham is dry-cured with salt, and manufacturers can choose whether to sprinkle in additives. So, it’s also a kind of processed meat.

The use of sodium nitrate and celery powder can create some confusion.

When people ask whether Serrano ham is processed, they usually want to know if it’s been cured, salted, and loaded with additives.

Whether the additives are natural or synthetic doesn’t make a big difference since the answer remains “yes.” Serrano ham is a processed meat product.

Just because Serrano ham is processed doesn’t mean that it has a low nutritional value.

A healthy diet is all about balance, and Serrano ham is an excellent source of minerals and proteins.

Other types of red meat like beef are full of saturated fatty acids, and consuming too much can cause cholesterol issues and increase the risk of cardiovascular disease.

Alternatively, more than half of the fats found in Serrano ham are unsaturated and help protect the heart.

Therefore, Serrano ham is healthier than meats like bacon, sausages, or pancetta.

The meat’s B-complex vitamins allow our metabolism to function correctly.

For example, the B1, B3, and B6 vitamins turn nutrients into energy, encourage the production of red blood cells, and engender good skin health and DNA repair.

The ham’s curing process reduces collagen storage, making the meat easy to digest. The meat doesn’t strain our digestive system, so we can break down and absorb amino acids more efficiently.

Other cured meats like Bayonne ham and Prosciutto di Parma spend longer periods covered in salt. This results in higher levels of nitrosamines, which are seen as strong carcinogens.

Since Serrano ham is covered in salt for up to 10 days and isn’t cooked or fried, there is less nitrosamine accumulation.

Compared to other cold slices and red meat products, Serrano ham can be a nutritious addition to a balanced and healthy diet.

What Ham Has No Nitrates?

Many manufacturers have started labeling their products as “nitrate-free.” This is primarily due to the research into nitrates’ negative impact on overall health.

So is it possible that there’s ham with no nitrates?

Instead of using synthetic nitrate, meat manufacturers use fresh celery to extract large quantities of salt. The celery is juiced or ground up, and the meat is treated with celery extract during the curing process.

The pork still contains nitrates, and the only difference is that they’re made from a natural ingredient such as vegetables.

Therefore, packaging with words like “no nitrates” or “uncured” can be misleading, as these meats contain about the same amount of nitrates as traditionally cured meat.

Besides, eliminating nitrates from food would also pose some health risks. They help the meat last longer and prevent the development of toxins that cause botulism.

However, if you’d prefer to eat meat without sodium nitrite, here are some popular options with vegetable-based nitrates:

Ultimately, it’s best to look at the packaging information and go for the option with the lowest levels of nitrates.

Serrano ham enjoys worldwide popularity and is an inextricable part of Spanish cuisine. It goes through an extensive curing process, and salts give the ham its meaty flavor and iconic pink color.

Unfortunately, the finished product contains nitrates, whether the salt is sodium nitrite or naturally sourced.

While a high nitrate intake can cause harm to our bodies, Serrano ham also carries minerals, vitamins, and proteins that promote the health of our metabolism. Treating yourself to a serving of Serrano ham won’t endanger your health and wellness goals.

When taken in moderation, the nitrates won’t do you any harm, and you’ll experience the full benefits of the ham’s nutritional value. 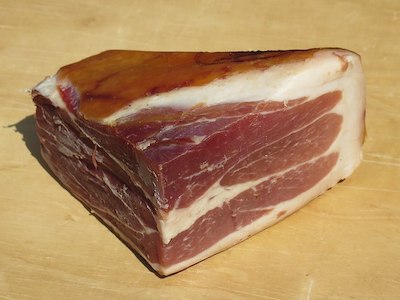 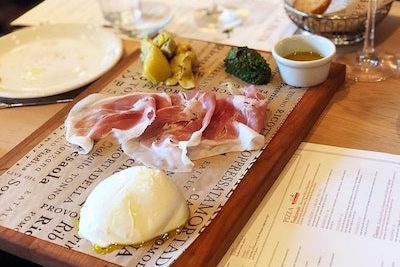 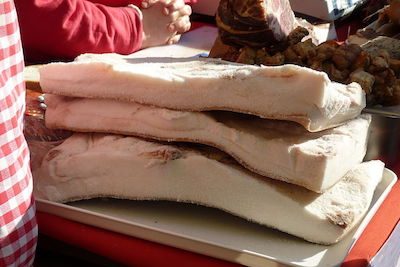 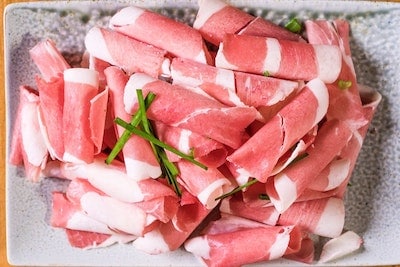 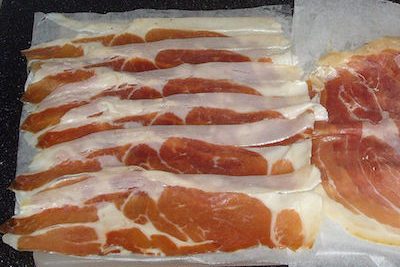 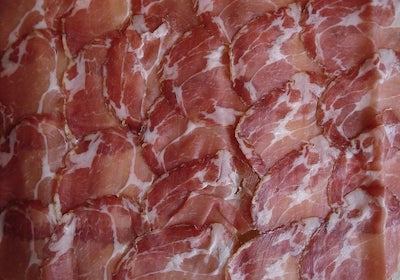